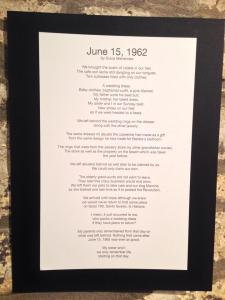 We brought the scent of violets in our hair.
The cafe con leche still dangling on our tongues.
Two suitcases filled with only clothes.

A wedding dress.
Baby clothes, baptismal outfit, a pink blanket.
My father wore his best suit.
My mother, her latest dress.
My sister and I in our Sunday best.
New shoes on our feet
as if we were headed to a fiesta.

We left behind the wedding rings on the dresser
along with the other jewelry.

The same dresser mi abuelo the carpenter had made as a gift
from the same design he had made for Batista’s bedroom.

The rings that were from the Jewelry store my other grandfather owned.
The store as well as the property on the beach which was taken
the year before.

We left abuelos behind as well later to be claimed by us.
We could only claim our own.

The elderly great-aunts did not want to leave.
They said this crazy business would end soon.
We left them our pets to take care and our dog Mancha
as she barked one last time as if to protest the Revolution.

We arrived with hope although we knew
we would never return to that same place
on Goss 183, Santo Suarez, la Habana.

I mean, it just occurred to me,
who packs a wedding dress
if they have plans to return?

My parents only remembered from that day on
what was left behind. Nothing that came after
June 15, 1962 was ever as good.

My sister and I
we only remember life
starting on that day.